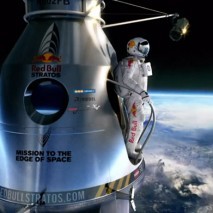 Last October, as Felix Baumgartner dropped from his capsule 128,100 feet in the sky, it wasn’t just his family that held their breath in fear of what could happen next. Red Bull had reason to be nervous about their most extreme marketing stunt to date.

With their tagline “Red Bull Gives You Wings”, the energy drink company has developed a single minded support for extreme sports over the years. Everything from base-jumping, Formula 1, water-sports, the X-Games and air-racing has the Red Bull stamp of approval.

The Stratos project represented not just the core of their brand purpose and the manifestation of a great brand story, but also their most risky stunt so far which, thankfully, paid off!

Was this courageous execution or a calculated gamble? We’ve all seen the reaction: 8 million views of the stunt live on YouTube, 29 million views (so far) of the mission highlights, an estimated 100 million euro in return on exposure for the brand, and commentators falling over themselves with praise – “the very pinnacle of content”.

But what if it had all gone wrong? Even from my simplified view, it seems jumping out of a balloon at near-space territory would present a fair few safety issues. However, Red Bull insist that this was not just a marketing stunt, but a chance to further our understanding of science; a mission to the edge of space. In this sense, perhaps they were immune to failure, whatever the result – a calculated gamble.

Red Bull have gone so far as to block the agencies involved in the project from talking to the press in order to move away from it being viewed as a marketing stunt. They have not been the type to just throw on their logo and leave, they have built credibility from their total commitment to supporting anything they put their name on – look no further than their dominant F1 team.

It does come at a price – it’s estimated that Red Bull invest a massive 30%-40% of their revenues in marketing, but if you align a consistent and ambitious brand strategy with significant investment, as Red Bull have, then you end up with a brand that has the potential to reach beyond the product.

However, now that Felix has announced his retirement, Red Bull are faced with a problem – have they set the bar too high and if not, is there anyone crazy enough to take on their next project?!