Brand Lance runs out of road 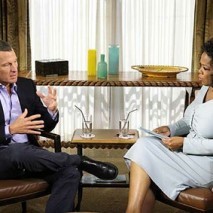 Truth shall set you free?

It’s only fair to disclose first that as a life-long cycling fan I’ve never been a Lance fan. Most real cycling folk knew deep down all along that the dream/miracle/myth – call it what you will, was total BS! Every great story is the product of two crucial components: the ‘Botch-up’ and the ‘Trying to Fix the Botch-up’. Brand Armstrong is at the latter stage (and critical point) of his long painful saga. On the morning after his first of two worldwide exclusive interviews with Oprah Winfrey, the question on the minds of Lance’s team and the products and companies he once endorsed is most probably: what comes next for Lance and his brand?

Once revered for being a cycling legend, best selling author, cancer survivor and visionary philanthropist, a final and damming USDA report published in October last year has the potential to tear it all apart. With a fallout that included the stripping of his seven Tour de France titles, a life barring from competing in all Olympic sports, the loss of three major sponsorship contracts and his step down from the role of chairman of Livestrong, it would take nothing short of a miracle to start reversing that kind of damage…or would it?

Finally breaking his silence (and going back on more than a decade of vehement denial against the doping rumours that have plagued him for most of his career), Lance Armstrong has taken the opportunity to come clean, so to speak, with arguably one of the most influential figures in popular culture to date.

Truth and transparency can be powerful tools for any brand, but confession is where it really pushes the issue into the ‘make or break’ scenario. Held to such a high standard for such a long period of time, as is the case for a lot of sporting legends, the multi-million-dollar question is, will the public forgive his significant indiscretions? Also, what kind of weight will his brand carry now and how much good will does he have to leverage at this point?

While his cycling career is most definitely over, if “Brand Clinton” or “Brand Tiger” is anything to go by, a confession, some half truths, weasel words and some false humility may just be the ticket for Lance Armstrong to catch a return ticket. Whether or not he’ll be given permission to dip his toe into any other ventures remains to be seen but, whatever the outcome, it’s been quite a ride!